Welcome to our Formula 1 VPN page. Here we inform and guide you how to watch all Formula 1 broadcasts free of charge online!

VPN-SUOMI.fi is a Finnish VPN information source who specializes on listing free sources to watch sports, tv-series and movies online. We have a very popular Finnish Formula 1 -page and we have got requests to publish this useful information also in English, so here you go!

🙁 In many countries Formula 1 is broadcasted only on paid channels and they might cost you a lot of money.

🙂 However, VPN prices start from couple euros per month.

Formula 1 is unfortunately behind a paywall for a lot of racing fans, and in our opinion the prices are too often way out of proportions. Luckily there’s an affordable and 100 % legal way around this, and that way is a VPN-connection and foreign, free public television broadcasts.

Vast majority of these foreign public channels have blocked viewers outside of their home country, but with a high-quality VPN-application you can circumvent these restrictions by changing your online location to the country, where the broadcasting is being done – regardless of you real location.

We continuously test different VPN service providers. As of now, we’ve come to the conclusion that NordVPN is the best VPN application for Formula 1 broadcasts. You can find simple instructions for VPN connections here.

The best VPN for Formula 1 broadcasts!

Formula 1 season 2022 kicks off with Bahrain Grand Prix on 20th of March and ends at Abu Dhabi Grand Prix on 20th of November. The race calendar held 23 races in total, which is an all-time record (this record was supposed to be achieved in the 2021 season, but the corona pandemic made a lot changes into the calendar and eventually 22 races were driven). However, the Russian GP had to be removed from the schedule due to the Ukraine conflict, so this season will at this moment also have 22 races. The city of Miami will make it’s F1 hosting debut during the upcoming season, as Italy and USA will host two races.

NEW REGULATIONS AND EXPECTATIONS FOR 2022 SEASON

F1 is continuing leveling the playing field for the constructors by reducign the yearly budget cap 140 million dollars, which is 5 million less than in the last season. This is expected to give smaller teams better positions during the season. The cars are also seeing a good chunk of changes, which should support more skillful driving.

ALTERNATIVES FOR WATCHING FORMULA 1 BROADCASTS IN 2022

VPN-connection allows you to watch all Formula 1 live races for free. On this page you’ll find all free Formula 1 channels that have right for broadcasting in 2022.

We found several foreign TV channels that broadcast the Formula 1 season for free online. These broadcasts can only be viewed in the channel’s native country and are more than often restricted to outside views. Therefore you’ll have to connect your VPN application to the country’s location from where the broadcast is being sent. The broadcasting quality of these channels are just as good as any paid channels. Also notice, that VPN will allow you to watch much wider selection of programming than just the Formula 1s.

Almost all teleoperators offer Formula 1 focused channel subscriptions, but they have one huge problem: hefty prices.

The program selection of paid channels are great and commentators are good quality. F1 TV still triumphs many of the domestic broadcasters when it comes to quality, but unfortunately F1 TV is not available in many countries because of the broadcasting right distributions. As of now the only real viable option to watch the Formula 1 is to either order a paid F1 subscription or use VPN and watch almost everything for free online.

Price: Hundreds of euros per year

COUNTDOWN TO NEXT FORMULA 1 GP

2. Connect the VPN to desired location

3. Tune into one of the recommended TV channels and watch Formula 1 broadcasts live online

VPN PROVIDES YOU A LOT MORE THAN JUST FORMULA 1! 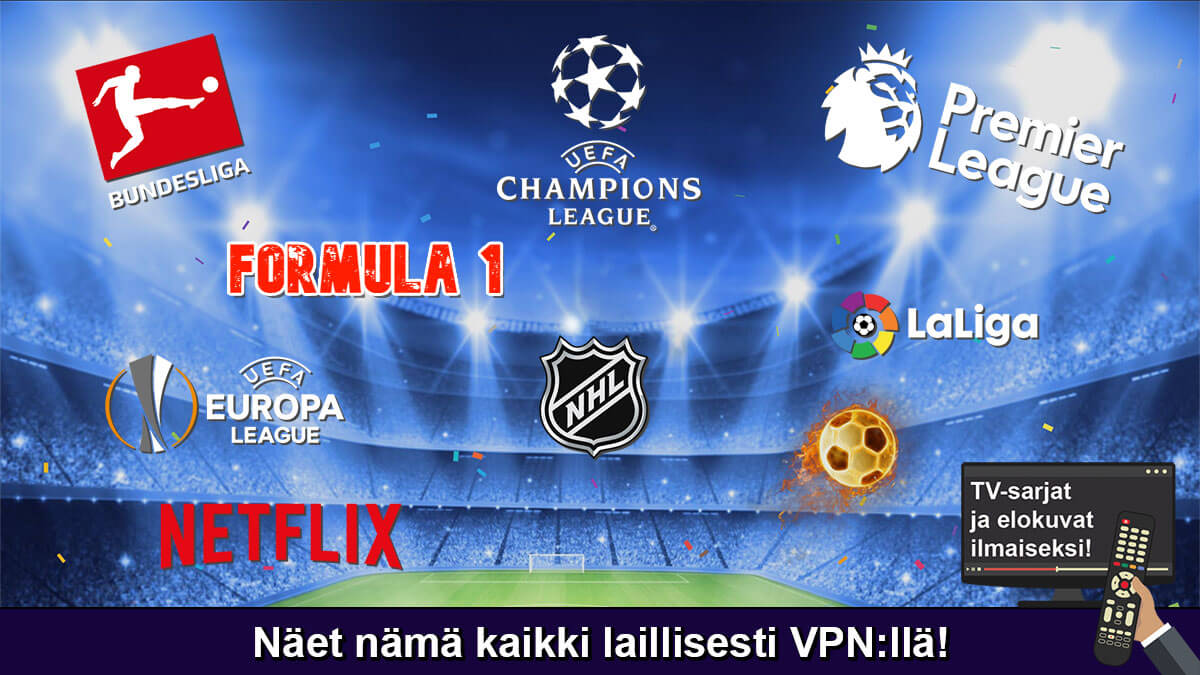 USE THE FAST LINKS

YOU’LL NEED A VPN CONNECTION, CHOOSE TO YOUR LIKING

Both VPN services provide a money back guarantee in case you’re not satisfied!

Below you’ll find a list of all the channels and networks that broadcast Formula 1 races live for free on season 2022.

THE BEST VPN CONNECTIONS FOR FORMULA 1